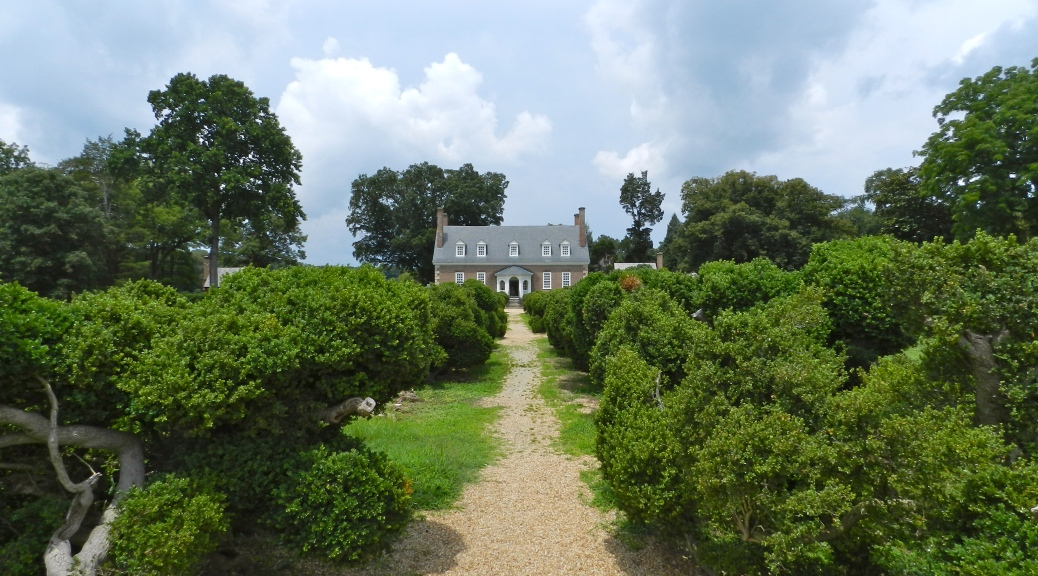 On a recent trip down to Virginia, my wife and I finally got a chance to see Gunston Hall in Lorton, VA.  This 18th century mansion was the home of George Mason — a patriot, statesman and founding father  often best known as the ‘Father of the Bill of Rights.’

The plantation sits on what became known as ‘Mason’s Neck’ in Northern Virginia on the Potomac River. This handsome brick home was under construction from 1755-1759 and was a formidable mansion in its day. The exterior is brick with distinctive quoins in the the four exterior corners exude a sense of permanence and have helped the home outlast most of it’s contemporary wood clad buildings.

The detailed interiors were designed by a young William Buckland who went on to design the interiors of other famous homes including the Hammond-Harwood House, Mount Airy (Richmond, VA), and the Prince William County Courthouse.

Buckland worked with the very talented carver William Bernard Sears to fit out the interior of the house. The interior combined elements of rococo, chinoiserie, and gothic styles which was an unusual contrast when compared to the simple decoration favored in Virginia homes at the time.  Although chinoiserie was popular in Britain at the time, Gunston Hall is the only known house to have this decoration in colonial America. [click here for more info — previous sentence paraphrased from this Wiki entry]

Unfortunately the museum does not allow photography inside the mansion, so you will have to take my word for it, but the interior details and carvings are exquisite — from the fretwork in the yellow ochre dining room which imparts a very asian feel, to the gilded rococo baufats and carved egg and dart details on the doors and mantel in the ‘Paladian room’. From what little remains of Buckland and Sears’ original work you can see what gifted craftsmen they were.

Based on architectural and archeological research, conservators and preservation craftsmen have done an excellent job preserving and restoring the home to much of it’s earlier prominence — from carvings, to wall papers and hangings, to the chinoiserie. Much of this restoration work is fairly recent and the house is deliberately spartan in the areas where they do not have reasonable evidence to say what was there originally. (A refreshing take compared to some other properties wherein the preservationists and curators filled in the blanks as they went and thus blurred the line between was was really there and what is an educated guess on how to interpret a room)

On the rear or riverside of the home you will see the allee of boxwoods that date back to the time of George Mason and may be the last extant example of a once imported Boxwood species no longer found in England. The rear porch was also quite distinctive with it’s Gothic arches.

If you are interested in architecture, woodwork, wood carving or early American history I highly recommend a visit to Gunston Hall. It takes about  half day to see it all and explore the grounds and outbuildings. You can learn more about this historic site here.

A mix of hand tools and prep work this evening to plumb up the corner of the landing for the next post — a LN 60-1/2 low angle block plane was much better than using a belt sander
Yesterday’s progress — building a custom light box for under the staircase landing
I guess I have been using Pica pens and markers longer than I thought as I noticed my Pica Dry 3030 has been evolving — I have at least 3 generations now
Another newel post cut, finished and installed 🤩
Pica Dry and Pica Ink Refresh + new model 7070 precise
Installed a new kitchen sink faucet 🚰 looks great with the kitchen 🤩
Follow Rainford Restorations on WordPress.com