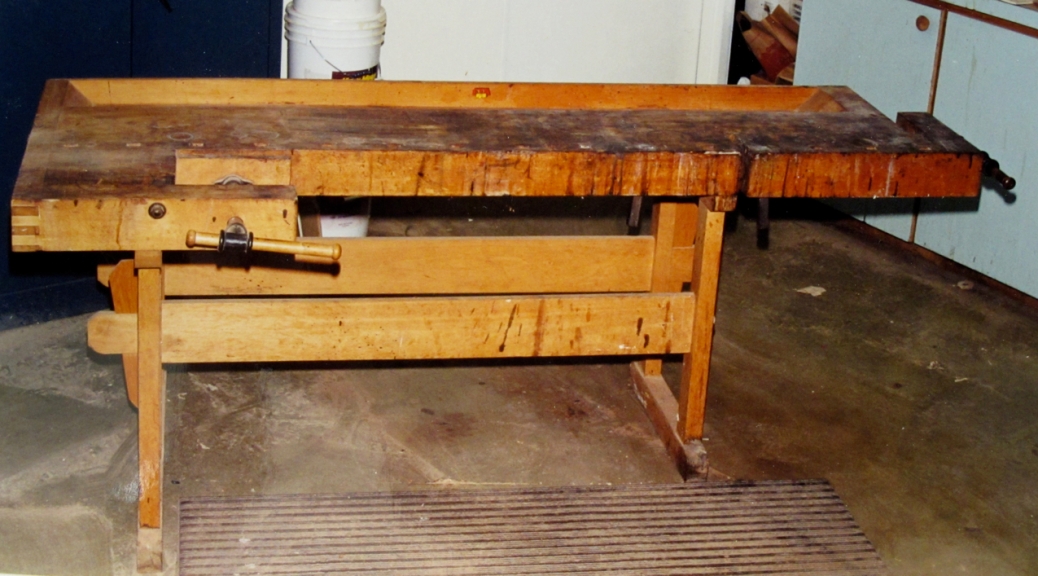 You can read Bob’s post here. Bob shares his thoughts on this form of bench along with some interesting anecdotes on his time in Denmark and importing some ETA benches.

Bob also had a couple questions/comments that I wanted to reply as they are good topics of discussion:

“The first was the top surface. Bill uses two 12¼-inch wide “slabs.” He suggests using three boards instead of two if you can’t find these widths. My workbench is made with slightly less than 1-inch wide boards laminated to form the wide surface. Wider boards could warp over time with humidity changes and water spills. The laminated narrower boards seem to me a better idea.” == Bob Flexner

The slab portion of my bench-top is only 12-3/4″ wide and was composed from two ~7″ wide 8/4 boards that were hand selected. I chose pieces with nice tight and even growth rings oriented to be reasonably stable — trying to get as much quarter sawn grain as I could from those pieces. The wood also sat in my reasonably climate controlled shop for a few years before I got around to building this bench. In the 3 years or so I’ve been working on this bench I haven’t had to re-flatten it at all so far.

When building the bench I gave serious consideration to deviating from Frid’s design and building the top from narrower laminated strips. Given the stock on hand I didn’t think I was buying myself much as it would have been a lot of ripping and jointing and gluing to get a very similar grain profile to what I had. If I didn’t have the quality of wood I had on hand, or if the bench top were thicker, say 4″ thick instead of 1-3/4″  or 1-7/8″, I definitely would have laminated up strips as Bob suggests.

“One more thought. Once or twice in forty years the mortise-and-tenon joints at the top and bottom of the legs have worked loose and the workbench became lose front-to-back. To tighten them I removed the bench top, which just sits on the frame, and drove the wedges that tighten the joints a little deeper. So I don’t understand Bill’s rationale for gluing the wedges in place.”

When gluing the wedged mortise and tenons in place I was following Frid’s advice directly from his books. I believe he used PVA glue, but chose to use hot hide glue so I could have a longer open time and potentially repair it if need be in the future.

Side Note: Below is a photo of one of Frid’s extant benches at the home of his son Peter Frid. (Check out this earlier post wherein I got to meet Tage’s son Peter and Grandson Oliver) This bench seems to pre-date the ones shown in Frid’s article and books. The example below is likely from the ~1950s.

Notable differences compared to the workbench in his book include hand cut dovetails on the tail vise, a much thinner skirt board and dog-hole strip, wooden screw in the shoulder vise with much larger wooden jaw, a little less refinement in terms of details on the vise jaws and undercarriage. Nonetheless this bench seems to have over a half century of use to its credit and the legs were still solid and the vises moved surprisingly well. It gives some interesting insights into how even Tage Frid’s interpretation of this sort of workbench changed over the years.

I hope to have and use my workbench for many more years to come and I’m sure it will acquire some more scars over the years that become part of its history.

P.S. You can check out some other posts related to the Tage Frid inspired workbench along with a simple Deadman, Side-clamps and other similar workbenches out in the wild here.

Getting ready for 🎃 Halloween
My first Boy Scouts hike with the boys! It was a ton of fun. I was also the only Dad rucking it with my @goruck speed Rucker and plate.
After so many years with an abrasive wheel cutoff saw I am still in awe of the @evolutionpowertools_usa saw. It cuts clean, cold and fast through steel and made quick work of breaking down 20’ and 24’ sticks of metal
I have some more metalworking and welding in my near future…⚡️🔩⚡️
We took a trip to Hogsmeade and Hogwarts to brush up on our Wizarding skills and fight off some death eaters….as a family
I saw this nicely carved sign and thought of you @woodcarverguru
Follow Rainford Restorations on WordPress.com