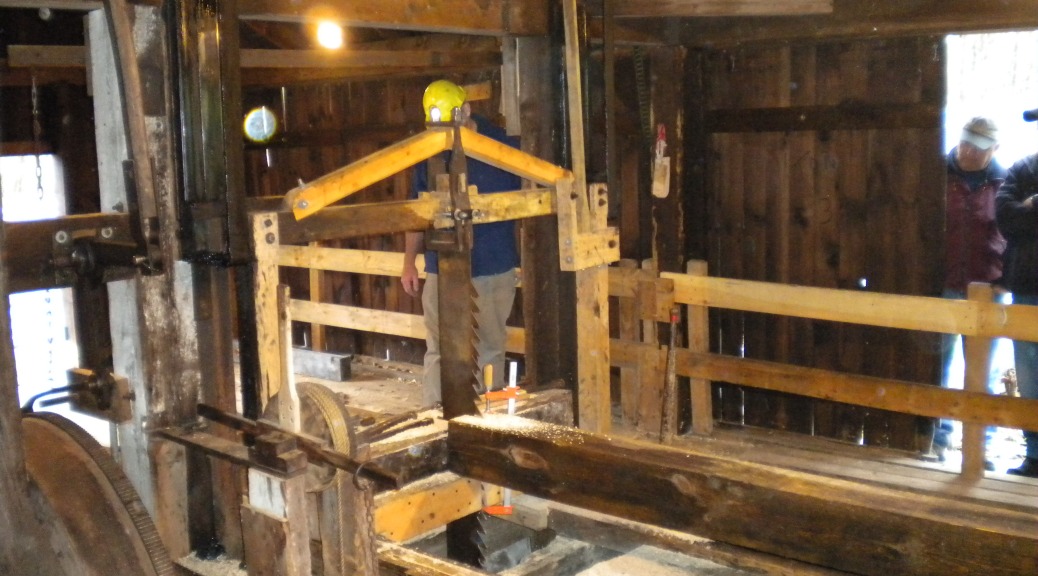 One of the hidden gems of Derry NH is the 200+ year old Taylor Sawmill. It’s one of the last surviving and working up and down sawmills in the region and likely the country.

Powered by a large water wheel, this mill still operates for demonstrations and the occasional bit of restoration work.  It’s amazing to see and hear this mill in action. There is a distinctive noise as the saw makes each powerful stroke like clockwork, and it’s almost scary as you can feel some of the vibration through the floor and feel the air move as this massive timber frame saw blade oscillates up and down.

The blade itself is held in tension by a massive timber frame. You can think of it as a giant frame saw. The blades could be changed based on the type of materials being sawn and desired finish quality results. In the video below you’ll see the mill operating at one of its slowest speeds. Each blade was set and sharpened by hand. As the saw cut the timber, the ratcheting mechanism (driven by the massive geared wheel in the bottom left of the photo below) advanced the entire timber into the blade via a moving carriage.

The mill itself sits on land in Derry NH purchased by Robert Taylor in 1799. The mill started operating in 1805 and had a fairly long service life. The mill site and 71 acres around it were purchased in 1939 by Ernest Ballard. By that time the original mill itself had been scrapped. Ballard eventually found a similar up and down sawmill in Sandown NH and moved it to the Taylor site. Ernest and his wife spent several years restoring and rebuilding that sawmill. He had to make the missing parts and track down a viable water wheel. Thankfully he persevered and was able to complete this project. In 1953 he donated the mill and 71 acres around it to the state of NH, thus creating Ballard State Forrest.

Back in 2010 I visited the mill with a class of North Bennet Street School students and took several photos and videos which I have edited together into a YouTube video that you can watch  here which includes the water wheel and saw cutting a timber.

It was an incredible sight to see, and a great place to have a picnic or do some kayaking. If you are in the area, please check it it out. You can learn more about this mill and plan your visit by visiting it’s official web page here and the Wikipedia entry here.

A while back as they were kicking around the shop for months one of my treads fell and made a deep dent in this tread. Here’s how I addressed it
The big sliding saw with two crosscut stops had made life a lot easier when cutting and installing the stairs
My youngest son (and aspiring apprentice l) came out to the workshop tonight to help me work on the stairs
Today’s progress on the workshop staircase
Kreg K4 system
After a very long work week I got a little time out in the workshop to make and fit the stair skirt board
Follow Rainford Restorations on WordPress.com