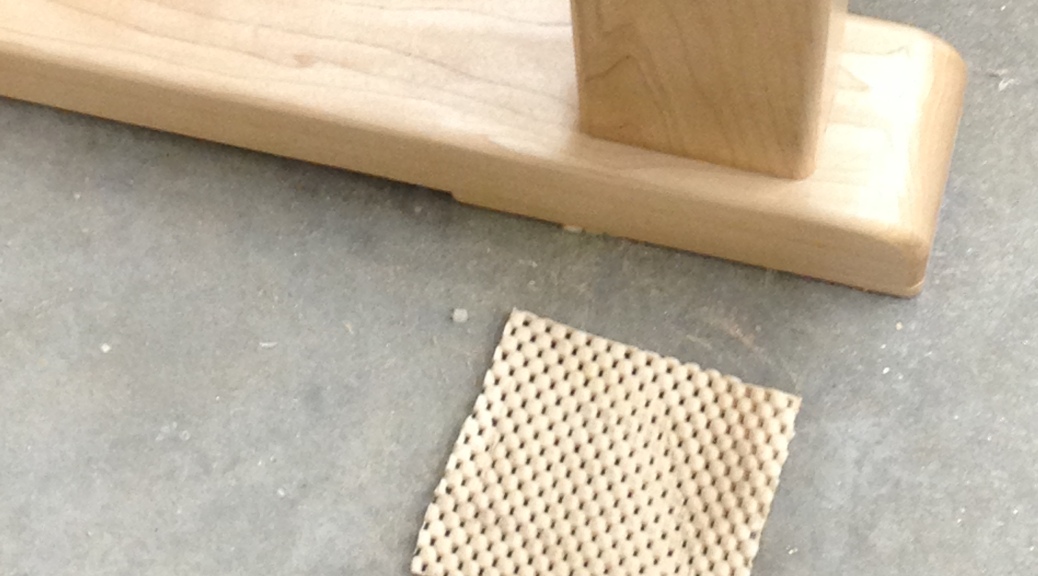 I recently finished off my never-ending project — building a proper workbench. I snapped some photos figuring it will never look this pristine again. Time to press the bench into service…

Things started off great, but I wanted to set my jack plane to take a heavy cut and see how just how aggressive I could get before the bench started to move. I’m 6′-1.5″ tall and 240lbs, so if I really get going I’ve moved many a sizable bench over the years. At 7′ long and made of solid maple the bench has a good amount of mass. The problem I have is a very smooth concrete floor which provides little traction for wood.

With a concrete slab I won’t be bolting the bench to the floor so I needed an alternative. I ran through several alternatives in my head but couldn’t come up with a good solution that didn’t jack up the bench. As I sat on my sawbench looking around the shop I recalled a blog post by Chris Schwarz from earlier in the year wherein he put some sandpaper on a shim and have very good results. (You can see Chris’ post here). Sandpaper didn’t get much traction on the concrete floor, but it triggered a different thought. Years ago Rockler marketed a ‘routing mat’ which was effectively an expensive roll of rubber drawer liner. The cheap Yankee in me promptly went out and bought a roll of drawer liner for a couple of dollars and he has served me well for a decade or so now.  I went to my router station, grabbed the mat and cut out four squares roughly the size of the foot pads on my bench. I put them under the bench and repeated my experiment…

To my surprise it worked great. The weight of the bench compressed the pad so much the bench height is negligibly higher off the ground. I was able to aggressively plane some hard maple scraps left over from the bench and it was solid and stationary. I’m sure someone who really wanted to move it enough could find a way, but the increase in traction was impressive. If you’re also living with a concrete floor in the shop you’ll want to give this a try — it’s about the best $1 bench upgrade you can make.

P.S. I’ll make some posts about building the bench, but right now I have a some competing priorities taking my much of my time. We have a baby on the way in August, I need to build a crib, and I’m teaching for much of the rest of the summer. I’ll be posting as I get some free time here and there but it may be in spurts.

P.P.S. In digging up the the blog post above from Chris I learned that I am not the first to do this sort of thing with various forms of rubber padding — nonetheless the simplicity and the results were still worth sharing.

In the workshop for my North Bennet Street School Founder’s Day post along with the “Ron” award
Another of my Milwaukee heavy duty tape measure blades developed a rip and snapped and for $32 I expected it to last longer. A year or so ago @elliot_jokelson suggested I try Fastcap tape measures I picked up a flat True32 tape that I’ve loved in the workshop and lefty/righty model that are both still going strong. For me I loved the Milwaukee feature wherein I could safely use a finger to stop the blade. The Fastcaps have a little button on the bottom to accomplish the same thing and while I didn’t like that mechanism as much to start I’m used to it now. For what it would cost to replace my two dead Milwaukee tapes I was able to buy 5 fast caps I can deploy around the shop so I’m not always looking for a tape measure and if one dies for the prices point of $8-14 each I’m not going to feel as bad about it when/if it breaks. We’ll see how this experiment goes but so far so good. I like the flat tapes when laying out furniture parts and the story stick tape is a nice novelty
Last nights progress… fabricating and installing corner boards to make the the return and tie into the knee walls
More progress…
A different form of making today — I ironed the family’s latest round of Perler Bead Pixel Art
Silicone glue brush made specifically for Festool Domino mortises. It’s a novelty sure, but for big glue ups is a nice time saver 🤩
Follow Rainford Restorations on WordPress.com